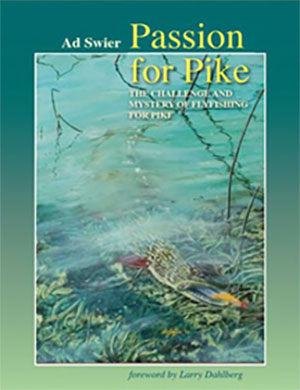 The Dutch fisherman, artist and writer Ad Swier has been fishing for pike for 50 years. Passion for Pike represents Ad’s reflections on that angling journey. Ad explains how it was he discovered the effectiveness of flyfishing for pike, and describes some of the contexts in which pike, including the very biggest pike, may be caught on streamers, divers, poppers and other varieties of pike lure. Since those contexts are international, Ad has assembled contributions from eminent pike flyfishermen around the globe, from the USA and Canada to England, Sweden, Holland and Ireland, devoting separate chapters to aspects of flyfishing for pike in those very different countries.
In these pages many different patterns of pike ‘fly’ are described and illustrated, and those who wish to begin to catch pike on the flyrod are of dressings, from most complicated, enjoyment of this of the pastime of angling. Ad’s focus throughout eautifullyadapted predator, landscapes and waterscapes, of his beloved Ireland, thrive. There’s humour story and controversy, and the description: Ad lives with his in Holland, on the River IJssel. Passion for Pike.


(Only available in English)